Feedback from participants in a Restorative Circle
“I was very curious to see how it would go. I had never experienced anything like it.
My reason for participating was twofold: on the one hand, I wanted to see how you were going to handle it, and on the other hand I wanted to get rid of my anger and frustration.
During the pre-circle, I was struck by your sincere interest and listening without any judgement. That is something I also try to do, but I don’t always succeed.
At the outset of the restorative circle itself I was very tense. But during the exchanges and with your guidance, that disappeared. I felt heard and respected. The tension went away.
Thanks!”

“During the pre-circle, I became aware of a very old fear, which I had blocked away until then. That was very healing. It was as if I found a piece of myself back that I had lost.
Several times, I wanted to go faster and I was called back. One step at a time. Only through true contact, ca the next step be taken. The quality of your listening and the immense space to examine what exactly was touched, allowed for a deep healing.
Afterwards, I could see the whole process that had led to the conflict, and also my own role. All the pieces of the puzzle fell into place once I became calm inside.
Thanks to Restorative Circles I could see what happened as an enormous lesson which made me stronger.
Thank you for that!”

Feedback from participants in Restorative Circles at a primary school

The girls in Class 8:
“I myself did not like the Restorative Circle at all, but it did help in the end. By speaking with each other and understanding each other, it’s impossible not to understand each other. Things are ok now in class. If we have a problem or a conflict or just something we want to speak to each other about, we sit in a circle and we speak just like in the ‘restorative circle’. Almost always, just one circle is enough! The time-out also works well. We use it if we need more time and when it’s ok, we can get on with each other again. So thanks! Cheers.”

“We learned to understand each other better.”

“We (the girls) can handle small conflicts ourselves, we are not angry as often any more and if there’s an issue, we talk about it.”

The teachers:
“This process has given us tools to talk about conflicts with the children.”
“We gained more insight into the issues and we have a better understanding of what the children went/go through.”
The director:
“How powerless can you feel as director when things are amiss in a group! There was a call for a forceful intervention from many sides (i.e., one or more children would take the blame and be excluded). But exclusion is the last thing I wanted. On the other hand, I do carry responsibility for ensuring that the children all have a good time at school and that the staff can cope and stays healthy. That’s an enormous challenge when there’s a huge conflict.By holding Restorative Circles, we were able to turn the situation around. In my perception, it has lead to true solutions and mutual understanding between the children themselves, which was sorely needed. But also between the parents and the school. And between the teachers and the children. And between the teachers and the director. It was a beautiful process, strengthening all participants. That is something we never would have dared hope for three months ago!”

‘Restorative Circles, the importance of being heard’:

Together with Foundation Herstelcirkels, Perspectivity (www.perspectivity.org) organized a facilitators’ training for the members of her network, consultants and others. During two days, the participants practised intensively and experienced the challenges of facilitating a restorative process. The semi-simulated circles provided beautiful examples and insights for the conflicting parties. And we felt the deep impact of rediscovering our common humanity. It was an important experience for all those present. 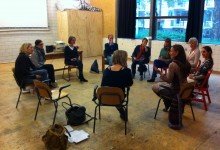 “‘It was good to discover the power of the restorative circles, to not only know that it works, but to actually experience that it works.” Perspectivity installed the Restorative system and about a year later, a Restorative Circe was held.
In this video, the facilitator and participants tell about the effects:

THE FILM:
Raamro Aakha Ma
(In the Eyes of the Good):
Supporting the peace process in Nepal with
Nonviolent Communication Training
and Restorative Dialogue
“This documentary tells the story of former Maoist combatants, conflict victims, and government officials engaging in a restorative dialogue, following the aftermath of the 10-years armed conflict in Nepal. It shows what can happen when people are able to connect with one another across divides, beyond fear, stereotypes, and enemy images. The Nonviolent Communication training including the restorative dialogue, was organized by ZFD peacebuilding advisor Jeannine Suurmond, together with partner organization Pro Public. The goal was to offer those involved with the transitional justice process in Nepal an opportunity to experience a restorative dialogue first hand. The documentary was produced in order to support the various parties to the formal Truth and Reconciliation process in Nepal and to raise awareness about Nonviolent Communication and restorative dialogue as tools for healing, reconciliation, and justice. “
YouTube Link to the Film: https://youtu.be/RqA2OydkXgg